In all important Siva temples of South India, the navagrahas (nine planets) are placed in a separate mandapa with a pediment of about three feet in height.Performing Navagraha Homam is very auspicious. Offerings like sesame seeds, rice or any of the "nine grains" that may be appropriate are also made. Lighting lamps with sesame oil or seeds on Saturdays is important to Sani. Thil rice and Paayasam are offered to Navagraha. 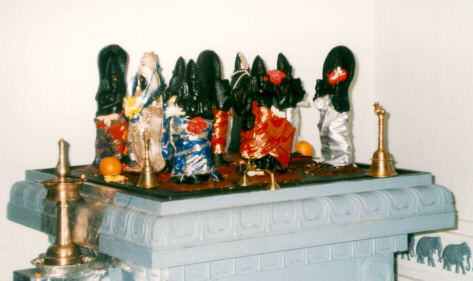 The sculptures of grahas in Indian Temples are oriented in such a way that no two grahas face each other. Eight grahas surround the surya. Surya faces east. Each graha faces one of the four directions.
The planets not represented in Indian Temples as part of the navagrahas are: Earth, Pluto, Uranus and Neptune. Earth is represented as a goddess: Bhuudevi.

The third planet from the sun(92,897,000 miles). The only planet we know of that supports life of the nine.

The seventh planet from the sun(1,786,400,000 miles). This planet also has rings, but they are less distinct than Saturn's. It maintains a fairly constant temperature of -216 °C . It is four times the size of the Earth with a diameter of 31,763 miles.

Notes on significance of sculptured icons in Indian Temples

Depiction of maize in the sculptures of Indian Temples

Cobs in the hands of sculptures

"Archaeological discoveries in the last decade have carvings of maize, etc. and indicate that the sculptural work was typical of sculptures of the reigning Hoysala Dynasty of the 11th to 13th CE.centuries. Direct observestigations in the temples shows that no two maize ears are identical. Each of the more than 100 temples has similar carvings. Over 80 large ears are present in the last and most beautiful Somnathpur temple with several hundred examples of smaller ears elsewhere, in the roof for example, and demonstrate that they appreciated the multi-seeded fertility symbol, just as they carved the images of the Annonas and sunflowers, which are multi-seeded fruits deccorating the walls and courtyards.

"Maize breeders in India, China, United States, and Great Britain, who have seen extensive collections of the illustrations, concur with me that only sculptors with abundant ears of maize as models could have created these illustrations of maize. No other biological product has these assemblages of anatomical charateristics within the envelope of variations of maize. I grant that these findings have been thought to be impossible in the earlier belief systems that maintained no significant contact between New and Old World. Their beliefs have to give way to the reality. Archaeological findings will soon be found to verify these predictions, which is also a fascit of the Scientific Method.

"We are currently finding much more evidence of contact between Asia and the Americas. Many of these relate to DNA complexityof biotic forms that can be tested for indications of genetic similarities and genetic distances, but written literature, paintings, sculptures, and archaeological finds all support not detract from the diffusion hypotheses of very ancient sailing contact in the building of high civilizations around the world.

PRE-COLUMBIAN MAIZE IN CHINA AND INDIA?

"The evidence of maize in archaeological sites in China and its depiction in Hoysala Temples in India, both dated before the 15th century A.D., suggests that this domesticated crop was diffused by human action before the arrival of Columbus in the New World. The implications of this evidence are of great magnitude, since the presence of maize in Asia indicates that humans were able to migrate between both hemispheres; more than likely through trans-oceanic means of travel."